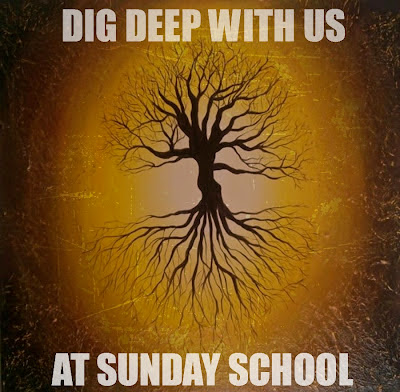 when one is a pastor and meets regularly with colleagues and other religious leaders across denominations and faiths, there are often a few common denominators that can be counted on with precise regularity.  the first, and perhaps most obvious, is that clergy are an odd lot.  i have tried to distance myself from this reality, but have had to come to terms with the fact that i can't possibly be the only normal one, and so I, too, must be a bit of an odd bird.  as much as this pains me, i at least feel good about the fact that i carve my own odd path into the jungle of the world, in a way that maybe no one else has ever quite done it before.  conclusion: i'm quirky and trailblazing, not odd and weird.

another thing that seems to come up in many clergy conversations is this: sunday school is dying or already dead.  if i had a sunday school student for every time i heard that, i'd have a major classroom size problem.  the lament about the state of sunday school is nearly always followed by a litany of reasons for its demise, including (in no particular order), sports schedules, video games, laziness, busyness, apathy, barack obama (some people just want to blame him for everything), and that dreaded enemy of the church: change (as in, "things are changing." which i assume is meant to be followed by disapproving shakes of the head or all-out gasps of displeasure).

i never gasp though, and even find it difficult to participate in the sacrament of whine and moaning, because i am often too busy noticing something missing from the list.  when pastors begin aiming their weapons of mass complaining they always seem to miss what is, in my opinion, the main target: themselves.  or perhaps it would be more fair to say that one of the biggest reasons that people don't come to sunday school anymore is that sunday school stinks.

now you can gasp.

i said it, and i don't intend to run for office, so i'll stand by it.  i'm not just talking about my church or your church, i'm talking about church.  i know that there are some awesome exceptions, but for the most part, our churches stink at faith education.  it's not just a p.r. problem that when people think of sunday school they automatically think of the 1950's.  it's because, in many ways, we've failed to move much beyond that. 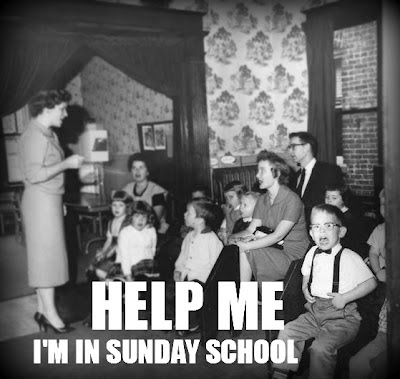 and so, most congregations have finally put down the flannelboard apostles, but not in order to try something new, but simply so that they can use both hands for the wringing that is so characteristic of our scarcity mentality.  our refrain, sung in every corner of the country, in churches and synagogues and sunday school rooms (and, as i see it, in lions clubs, rotary clubs, kiwanis clubs, and so on) is this: "why does no one come to us anymore?  if only we could get a few young people.  things sure have changed in our country - what a shame."

when that becomes our theme song (intentionally or not), small wonder no one wants to come.

and so, to rid ourselves of any sense of guilt or responsibility (remember, i can say this stuff since i'm not running for office), we declare sunday school as either dead or on hospice care ("just make sure that the old ladies who still attend are comfortable until there are none left" - i've actually heard this argument from a colleague). 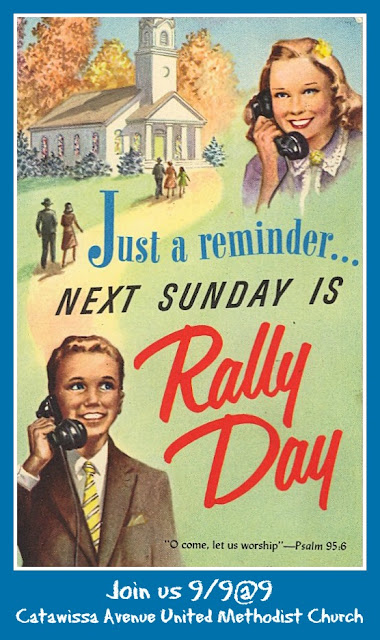 but not us.  no, we've decided to take a serious look at ourselves this summer at catawissa avenue united methodist church and ask ourselves, "why would someone want to come to sunday school?"  we have had to admit that sometimes we've put the bare minimum effort into creating something engaging and exciting and - perhaps most importantly - worthwhile, and that that bare minimum effort sends a very clear message: this isn't that important to us.  whether we meant to or not, we have often sent the accompanying message: this really doesn't need to be important to you, either.

and we start this sunday.  we're calling it rally day, because rallying is exactly what we are doing.  but we are really focusing on our need to dig deep.  sometimes we all feel like any kind of stiff wind might just blow us right off our faith foundation.  sometimes we feel so disconnected and uprooted that even a traffic jam or a unexpected delay threaten to rob us of our joy and perspective.  sometimes we feel that the cultural landscape around us has changed so much that we're not sure we fit in at all anymore.  we all need deeper roots, to keep us secured to our foundation, and we are convinced that sunday school can help us dig those roots in deeply.

so we are giving it a shot.  i've been preaching for four weeks about the critical importance of Christian education.  we've been  making phone calls and publicizing our event in the newspaper and on the radio.  we'll be celebrating on sunday with games and prizes and a celebration of the possibilities of sunday school.  and even though we have no idea what to expect on sunday, we refuse to give in to the convenience of wishing the world would change around us, without us being willing to change our world.

so we'll be digging deeper.  if you're nearby, we urge you to consider joining us in this journey.  if you're not, we hope you'll find an intentional way to study God's word in a small group setting within the context of your own church, sunday morning or otherwise.  if your church doesn't have such a thing, start one.  be quirky.  be trailblazing.  heck, be odd if you have to be.  but, most of all, be willing to change and grow and learn and dig your roots in deeply to Truth.

Pastor Eric Funk said…
First we are ALL an odd lot!
Second, what a wonderful time to reThink Sunday School.
It is time for churches to renew the Wesleyan emphasis on intellectual growth.
9:11 AM

Emoly said…
I have been waiting a long time to use this quote, "Still another pastor who recently changed to a dedicated Sunday school time put it this way. 'It really bothers me that parents will do anything to accommodate their kids’ sport schedules, including weekend tournaments, but they are offended when we ask them to set aside 2 hours on Sunday morning for worship and Sunday school.'"

It's from our Pastor's wife, who is our immediate Past District Superintendent and is now pastoring two churches, where I believe the average attendance is around thirty.

To your other point, I hope it's not dead because for the first time in a long time, I'll be teaching Sunday school again. I'm using the Skit Guys You Teach series. I will also use their Live! dvd. I watched it the other day and while I may not have a good grasp on materials, they at least make me laugh and I am hoping but mostly praying that they get through to my Jr. High students.

Good luck this Sunday, I'll be praying for you!

ps: we call it Homecoming Sunday, just thought I'd share that too.
7:45 PM