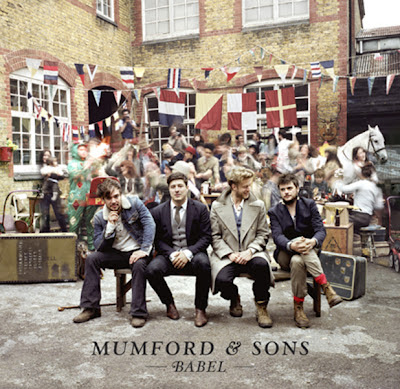 i once found a garnet.  my dad is an amateur geologist and avid rockhound, and sometimes family vacations involved me tagging along and digging up rocks and cracking them in half and so forth.  usually i just found things that looked like abraham lincoln eating a carrot, or whatever else my imagination could conjure up.  to me, everything just looked like grey-brown repetition.  except that one time i saw a glint of something shiny and colorful.  turns out it was garnet.  it was a euphoric feeling.  it was pretty awesome to see this raw gem in the middle of a mindlessly mundane landscape.

if i had come across that same garnet in the hall of science at the natural history museum, it probably wouldn't have even gotten a second glance from me.

and so it is with this new mumford and sons album, their second.  i first heard their first album when i found it being almost given away by an online retailer.  for a few measly bucks, i thought i'd try something i'd never heard of, and when the first rapturous notes first hit my ear drums, i fell in love.  there was banjo and a reckless abandon.  there were the lyrics like, "you tell me that's exactly how this grace thing works...".  there were those irresistible swells of tempo and energy and passion and even the raw confession and honesty of a song like "little lion man."  it was refreshing.  and it was something that many people hadn't discovered yet.  it felt like a rare gem in the middle of a mostly mindless mundane landscape (soundscape?) called the music industry.  that was three years ago.

it's not the landscape has changed all that much.  it is still all about manufacturing slick hits by the flavor of the month, and selling whatever can be sold using skin and sex and autotune.  but the mumford and sons gem that was "sigh no more" seems to have been lifted and put into a museum.  everyone knows about it now.  they became famous.  they sold millions of records.  and with that comes incredible pressure to record another bestselling album.  the result is "babel" which came out today.

in short, it is good.  no, it is very good, but it feels like the gem has been lifted from the landscape, dusted off, cut, shaped, and polished a bit too much.  gone are the little quirks of "sigh no more" like tempo inconsistencies and slight pitch problems that made it so dang endearing.  gone is the sense that the listener was just eavesdropping on a man's confessional moment delivered in fury and rage, shame and turmoil, with more than a hint of mercy and redemption.  in its place is a very produced album, which sounds like a more refined version of mumford and sons.  the lyrics remain confessional, like they could have been ripped from mumford's journal, but somehow they lack the same raw power as in "sigh no more."  the music, while still containing the signature banjo picking, foot-stomping madness that helped make them so popular, feels less like a group of guys with something to sing about, and more like a group of guys who must make a successful record.  it's easy on the ears, but it isn't exactly moving to the heart.  at least not this heart.

so, just like i might if i saw a garnet in a gem display at the museum, i say that this is a good and beautiful thing.  but it just isn't the same as finding a rare gem in a place where you would least expect it.  here's hoping that the next effort involves a little less polish.