tiddly winks and black-faced hornets (i am a soccer dad) 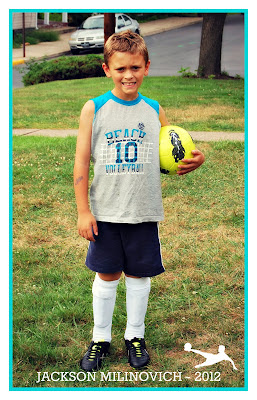 i finally have become the very thing i swore i'd never become....a soccer dad.

many people who have known me for any length of time have been treated to my vociferous opinion about soccer, often containing many dramatic declarations such as, "i'd rather play tiddly-winks, blindfolded, against an angry swarm of black-faced hornets than play soccer."

i'd even rather play a board game than soccer.  and that's saying something.

but parenting, which humbles all of us into it's obedient servitude, has demonstrated it's great power once again.  i don't get my 'tiddly winks to the death' scenario.  instead, i get to watch little kids chase a ball around for a couple of hours each saturday.

and (as much as it pains the old me to say this), i am going to love it.  i am going to help jackson put on his shin guards and panty hose (oops, they call them soccer socks, my bad), and after practice i will help him take off the same, though significantly more stinky.  i will cheer for him, i will offer random bits of unfounded advice, and i will be as proud as a man who has just realized how his own pride nearly led him to death by multiple bee stings can be.  i'll be beaming.

practice started this week, and the fun will ensue all autumn long.  whopeeeee!!!! 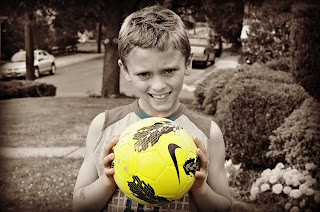 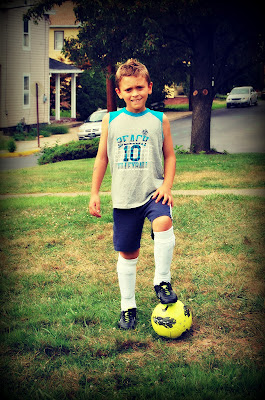 Mary said…
did he like it once he started? i know there was some hesitation....
7:50 AM

Cmilinovich said…
He looks so official! I hope he loves it!! Poetic justice I guess.
10:15 PM

greg milinovich said…
he loved it! sadly, he is looking forward to the next practice. :/
6:16 AM