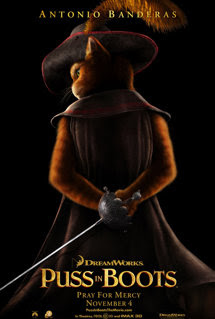 last night we visited the redbox and came home with a movie for the whole family, a fanciful tale about a charismatic little kitten of fairy-tale lore.  as a spin-off from the shrek franchise, i wasn't sure what to expect (would it be as endearing as the first shrek movie, or as disjointed and forced as the last two?), but i was more than pleasantly surprised.

in puss in boots we get to follow the adorable little feline through his story prior to meeting the great green ogre, and it is a tale full of adventure, thievery, betrayal, beanstalks, dance-offs (with a more-than-subtle tip of the hat to fight club), and a giant goose threatening a rampage through a village.  while there was a great deal of back story to have to get through (it barely held my kids' attention during those parts), once it got to the action, it was a great ride.

rated pg for some suggestive humor (the film starts with puss waking up next to another kitten, and trying to slip away unnoticed, before she wakes and he calls her by the wrong name - way over my kids' heads), it is otherwise great entertainment for the family, weaving together many fairy tales (in the shrek tradition) such as jack and the beanstalk, humpty dumpty (voiced perfectly by zach galifianakis), little boy blue, jack and jill, and, of course, puss in boots.  the other voices in the film are antonio banderas, salma hayek, billy bob thornton and amy sedaris, and all do a great job as characters in a story that is at once full of larger-than-life adventure and deeply personal relationships in need of some healing.

in the end, it is a story about friendship, and about how we all deserve a second chance to prove that we are "a good egg," even if we have messed up in the past.  the tag line, "pray for mercy," leads you to believe that puss is a vengeful hero who is slaying the evildoers, but really it seems more appropriate to apply the prayers for mercy to a context of friendships that we have damaged by harboring bitterness and resentments.  there are so many relationships in our lives that bend under the weight of an unspoken but deeply-needed thirst for mercy and forgiveness.  if only we would name it, offer that forgiveness (or receive it, as necessary), and move on towards thriving, we would find ourselves "earning our boots" as puss had to.  it is a great reminder to give one another another chance, and to be willing to both offer and receive forgiveness.  it is a reminder that no matter how cracked our shells may be, there is still a good egg inside us, if we would but forgive and be forgiven.  that is a mercy worth praying for!

monica said…
glad to hear a good review of this one. I have been so turned off by the shrek series and puss n boots. It feels like they plant these suggestive things that are over kids heads, but still not something I want them seeing and the more they see it, the sooner it won't be over their heads. It is all very subtle, but i just want a good wholesome with out wincing at innuendo. For other good whole family entertainment, we bought the muppet show on DVD and it truly makes all of us crack up.
10:46 AM