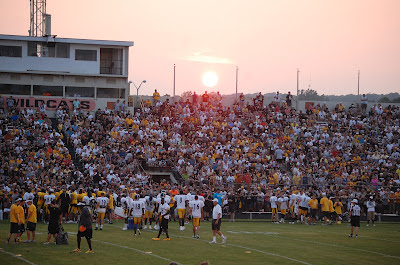 i had a great time in latrobe yestday, at steelers training camp.  actually, i wasn't at camp at all, but at the high school where each year the steelers do one night practice there under the lights in front of a packed house.  it is sort of a fan-appreciation night, with all the players signing autographs for 15 minutes (i got shawn suisham, charlie batch, and troy polamalu's among others!), and several steelers alumni returning for the evening.  in fact, much to my surprise, i got to see the retirement ceremony of aaron smith, marvel smith, willie parker and joey porter, who were all officially retiring as pittsburgh steelers.  it was great to see them there.  if you don't believe that the steelers are the premier sports franchise , check out this article, in particular joey porter's comments at the end of the article from the perspective of a player who left the steelers to play for two other teams.

once practice began, it was great to see all the players, all my old favorites and so many new guys.  after stretching, i was lamenting that i wouldn't get to see chris hoke do his traditional 'hokie pokie,' but instead the whole team starting clapping and trai essex did some kind of crazy dance, joined in by willie colon.  all the players were smiling and laughing, as was the whole stadium, and it was a fun moment of levity to start practice.

then the business began.  there was backs on backers (which was hard for me to see since it was on the opposite side of the field from me, but it looked like lawrence timmons was an absolute beast out there, just running guys over), there were field goal drills, punting drills, and some good situational football stuff (2 minute drill, i think).  ben didn't participate in the 11 on 11's, but did most of the other drills, and it didn't look like they were sparing him many throws, as he participated in a drill with all the quarterbacks and coach todd haley in which they tried to throw a football into a garbage can about 25 yards away.  ben and batch were the only ones to sink one.  when they did, the crowd really cheered.  i had never seen that drill before.

i also enjoyed the one-on-one battles between WRs and DBs on a variety of routes.  i always liked to imagine myself as a wide receiver, so those drills were most interesting to me for that reason.

the whole session was indeed "spirited," to borrow one of tomlin's favorite words, and it certainly looked to these eyes like running the ball has become a big priority as many of the offensive plays during 11-on-11s were runs.  it was great to be there, great to fellowship with a great turnout of steelernation, and great to "feed my fever" with my annual pilgrimage.  even though i didn't get home until very late, it was well worth it.

clicking on the image below should take you to a picasa slideshow of about 100 or so of my favorite pics from the trip.