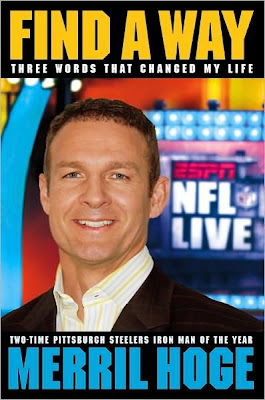 i recently finished reading "find a way" by merrill hoge, former nfl player and current espn employee.  while i was expecting little more than the sometimes obtuse reflections of former professional athletes, whose books are often the literary equivalent of those planet fitness commercials, "i pick things up - i put them down."

but this book pleasantly surprised me.

first of all, it chronicles hoge's battle with cancer in a personal and vulnerable way, letting the reader in on the emotions and fears of a man who once played against some of the fiercest linebackers in nfl lore.  i found the honesty about his fears and depression quite compelling.  and that's just the beginning of the book.

from there, he goes back to the beginning, telling the story of his unlikely rise to the nfl from his small-town upbringing in idaho.  he describes his distant father, who was home, but was hardly present to merrill and the family, and the impact this relationship had on him throughout his life.  he then tells the story of his college career, the nfl draft and his time with the steelers.  in fact, a large portion of the book is dedicated to his years with the steelers, and any steelers fan ought to give it a perusal, especially for hoge's effusive praise of coach chuck noll.  the book gives a unique glimpse into the way noll handled his players, including the overachieving hoge, and it certainly adds to the catalog of steelers lore associated with the great coach known as "the emperor."

hoge continues telling the story of his time with the chicago bears, his subsequent career-ending injury and the incredible long-lasting effects the head injury left him with.  in a new era in the nfl when head injuries are front-and-center, hoge's story is an important one.  read it to find out how he could not remember simple things, couldn't focus, and had trouble performing even basic tasks.

finally, the story returns to his battle with cancer, and how his strained relationship with his father has helped him determine to be a different kind of father; to find a way to be present to his children and his wife, regardless of the circumstances.  as a husband and father myself, i found this section to be particularly inspiring and challenging, and i found myself wanting to be a more present husband/father.

at times the book veered a little too close to "self-help" for my tastes, looking like it was going to offer a series of motivational sports cliches as a simple path to success in life.  however, a full reading of the book gave a much deeper, more honest, and sometimes painfully vulnerable picture of a man who has experienced some amazing successes, as well as some terrible pain and setbacks, but has found a way to live a life of courage and hope and love in the midst of it all.  it is short, easy to read, and i recommend it to steelers fans, husbands and fathers, and anyone looking to be inspired for an uphill climb in life. 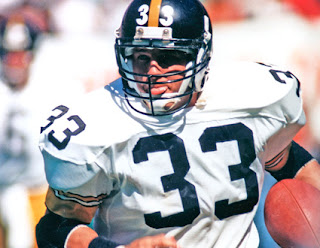 on a side note, i was a big steelers fan when merrill hoge was with the pittsburgh steelers, and he was always a favorite of mine.  i have also enjoyed his presence on espn, and this book only added to my respect of the man.