August 01, 2012
we joke around in our house that shannon has the "magic touch."  by that we mean that if there is going to be a lightbulb going out in our house, it will undoubtedly be at a moment when shannon has hit the switch.  whether she uses excessive force on the switches, or has some kind of magnetic personality is still up for some debate.  however, the fact remains: switches and buttons fear her.

the other night i had just settled in on the couch to watch some olympics on tv and some baseball on my computer, when shannon comes in and says something along the lines of, "um, you might want to come out to the garage and see something."

so i stopped listening to the yankees getting beat once again, and went out to the garage to see what was worth seeing. 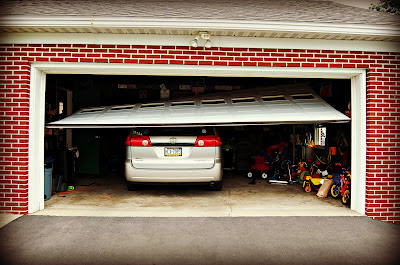 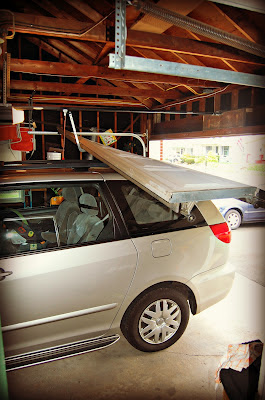 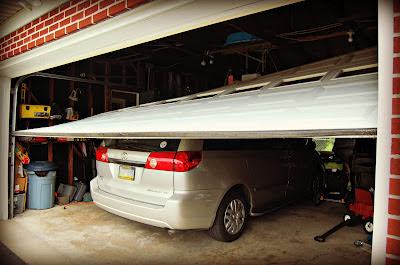 somehow, shannon had pressed the button to close the garage door, and then left to get something out of the freezer in the breezeway, when she heard an awful "crunching sound."  when she opened the door to look back into the garage, she saw the garage door hanging by a thread and resting on our van.

that's when she came and got me.  i wrestled with it for about 20 minutes, operating under the delusion that i might be able to put it back on its tracks.  after turning myself into a sweaty, greasy mess, i abandoned such ridiculous hopes and resigned myself to calling the number of the company that hung the door in the first place.  they came yesterday and put it back in a matter of minutes, and it seems to be working properly again, without any hitches.  still, they recommended not letting shannon close the garage door anymore.

Mary said…
oh no!! Im surprised Shannon was so calm when she came in to tell you! Glad its all back in order!
8:24 AM

greg milinovich said…
no real damage to the van. it landed on the roof rack. the damage to my sanity, however, was a bit more significant....
6:17 AM