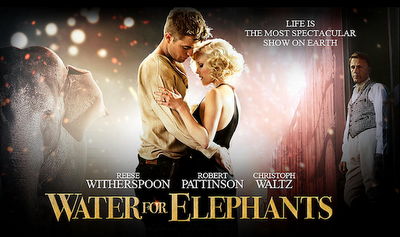 one advantage to the kids being at memaw and pappy's house is that you remember that you have a blu-ray player that plays more than just scooby-doo and batman.  i had nearly forgotten that they make movies for adults, too.

shannon had gotten 'water for elephants' for christmas, and we still hadn't watched it yet.  yep, we are those parents.  i think i've seen kung fu panda 2 four times since christmas, and i'm not even going to talk about cars 2.  yikes.

anyway, we pretended to be adults last night and watched this film.

and while i think it had some interesting moments, it was largely (at least for me) just an escape to a romanticized version of a depression-era america, where everyone is charming and beautiful in their rugged sort of way.  of course it takes place at a circus, and the film is certainly stimulating to the senses, given the subject matter.

but there is more here than just the make-up of clowns and show girls.  there is the question of the important moments of our life: do we find them, or do they find us?  i imagine john wesley and john calvin watching this film with very different interpretations.

and then there is august, the circus owner.  he loves marlena, his "prized attraction" wife, and he loves the circus, and he is capable of great generosity.  but what exactly does he love about the circus, or about marlena, for that matter?  the film raises questions about our won mixed motives, our obsessions and our propensity towards trying to control those we love in order to get the desired outcomes.

in short, it was a good movie, not a great one.  and for a fan of the movies who watches approximately 1.3 movies not rated G in the course of a year, it was a welcome escape.