no more vacation pics - or - what my kids will say someday 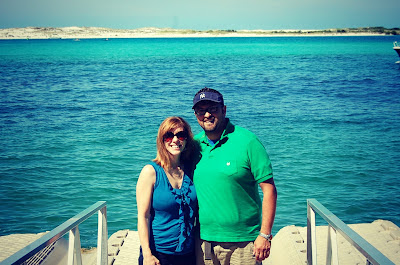 okay, i'm done.  no more re-hashing vacation.  i'll end with this picture of shannon and i in destin, florida, backdropped by water that looked unreal.  i'm still not convinced that the city of destin doesn't buy millions of gallons of food coloring to get the water to look like that.  seeing it in a picture is one thing, but seeing it with your own eyes is astounding.

this is a great picture of us, and we look so happy.  of course, we are exhausted after several nights of vomit cleanup, but i'd say we don't look too worse for the wear.  but if you look closer, you will see the creeping tentacles of that virus winding their way through our systems, as well.  it would only be some 36 hours after this photo that said virus would make itself evident, in that hotel parking lot in virginia.

it's hard for me to believe that this was in june and we are already nearly halfway through july.  maybe i keep writing about our vacation not only because i'm so far behind in documenting our lives but also because i don't want it to be so small in the rear view mirror already!  i feel like our summer is the exhausting attempt to cram 6 months' worth of activities into three months.

still, i wouldn't have it any other way.  we are living and adventuring and making memories and telling stories and taking pictures and laughing and eating and learning what it means to be a family.  someday i will have three grown sons, men, maybe with families of their own, and we will be able to look back on these summer days as not only fun, but also formative and foundational.  in my imagination, those adult children say something like, "thank you, mom and dad, for taking us on adventures and doing that stuff with us."  in reality, they will probably just look at the pictures and say, "why did you let me leave the house wearing that?"

but i'll know what they really mean.

and now it is on to the next summer adventure: a week at meemaw and pappy's house.  which means i'm going to rediscover the location of my living room couch.

Cristeen said…
fantastic post and Thanks for sharing this info. It's very helpful.
B&B in Jaipur
5:00 AM