June 28, 2012
imagine two groups of people.  easy enough.  now, imagine that they are at odds with one another.  they don't agree on things; don't see eye to eye.  imagine that this rift grows and endures for generations.  children are taught (indoctrinated?) to disagree with the beliefs of the other group.  are you thinking hatfields and mccoys yet?  good.  you're on the right track.

now imagine that the money and power at stake in this disagreement is monstrous.  there are millions of people involved in this disagreement, both at macro and micro levels, and the two groups don't simply have a philosophical difference of opinion, but a downright contentious and stubborn refusal to listen to one another.  just like me and my sisters when we were children, when one group says "yes," the other, instincively, says "no."  and if the former switches and says "no," the latter completes the circle and changes to a vociferous "yes!"

it is oppositional.
it is fear-filled.
it is respect-less.
it is head-in-the-sand, feet-firmly-planted stubborness.
it is gridlock.
and it is american politics.

enter a president.  not just obama, any president.  whether his neckties or her dress scarves are red or blue, it really doesn't matter.  take the most gifted and inspirational leader, vote them into office, and watch them wither on the vine.  watch their hair move from it's natural color to a thin and wiry gray.  watch the skin under their eyes sag, and the lines in their face grow deep with worry.  watch their ideas get mocked and ridiculed, shot down at every step.  watch their every word be scrutinized, called too soft by one side and too reckless by the other.  watch as their children see them torn apart and neutered by spin and scrutiny.  watch as so-called "journalists" report only news that suits their interest, and in such a skewed way as to support their agenda, tickle their listeners' ears, and (hopefully) make more money to feed into the machine.  watch as any leader - any would-be american giant - is cut down at the knees by that very machine.

on this day, as the supreme court makes a ruling about healthcare, and as we are full-swing into another political election season; as i listen to mitt romney gleefully proclaim that the "white house isn't sleeping well tonight," and as pundits everywhere get ready to either celebrate a victory or prepare to attack the decision piece by piece, i find myself somewhat, well, tired.

i am tired of an america that would rather attach mean-spirited stickers to the backs of their cars (a common one in this area: OBAMA - One Bad A** Mistake, America!) than give a leader a chance to lead.  i am tired of a media that is way too loud, measured in 45-second segments, and devoid of the possibility for thoughtful discussion and real change.  i understand the value of a two-party system, and the checks and balances that they naturally provide to one another.  but i am weary of the staredown.  i am tired of the tight-fist tug-of-war that is american politics, and tired of pretending that any president has any ability to do anything about it.

my sisters and i, by the way, are great friends today.  we got past our oppositional years, when i would even complain that they were "breathing my air."  we had to share backseats and bathrooms.  we had to smile for family photos.  we had to figure out a way to love each other even when we couldn't even stand each other.  and we did.  and we grew through it and we really love each other now.  we still don't agree on everything, but we aren't defined by that.

even though i'm tired, i'm conjuring up the energy to make that my prayer: that we would somehow learn that we will never agree on everything, but that if we are going to stay a nation (family?), we will need to work through this and love each other. 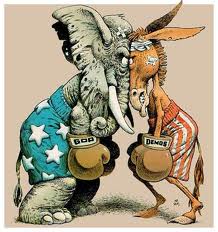