my few days in pittsburgh

after church on sunday, we drove out to pittsburgh (quin's first long car ride - he did great) and met my mom and dad and sisters and their families at kennywood park. 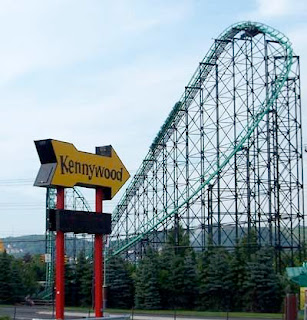 i got to ride the racers, the thunderbolt, phantom's revenge, the bumper cars, raging rapids, the kangaroo, the brand new roller coaster (forgot the name) and my all time favorite: the jackrabbit.  the boys got to ride a bunch of things, too, which was fun, and we had great weather and very short lines, so a good time was had by all.  it brought back a ton of memories since i spent two summers working there, and not that much has changed in 14 years.

monday night we had a little family and friends get-together so some folks could meet quinton for the first time.  we had a great time, but earlier that day i had slipped out for a little jaunt up to latrobe to catch the steelers second-to-last public practice of training camp at st. vincent college. 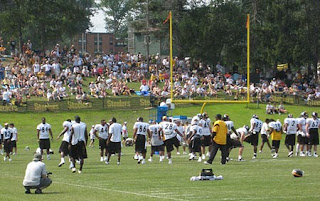 unfortunately, the weather was nasty, and just as the players got onto the field for practice, it started with the thunder and lightning pretty heavily, so tomlin sent the team back indoors.  all wasn't lost, however.  i had taken a great picture of backup nose tackle a few years ago at camp.  everyday at practice at the end of the stretching period he does this russian-style kicking dance that the players all call the "hokey pokey."  it ends with the this stocky defensive lineman making a great leap into the air and kicking his leg.  it's all quite impressive.  anyway, a few years ago at camp i captured a very fortunate picture of him at the peak of his leap.  i had it printed on an 8x10 and have been hoping to have him sign it.  i saw him at camp last year and asked him to sign it, but he was clearly having a bad day, and said something along the lines of "not today, man," as he kept hitting the sleds.  but this year, as he walked down towards practice, i held the picture out to him, and as soon as he saw it, he came over with a smile on his face and said he would sign that. as he was signing it, he asked me to send him a copy!  this picture is from my cell phone, but you get the idea: 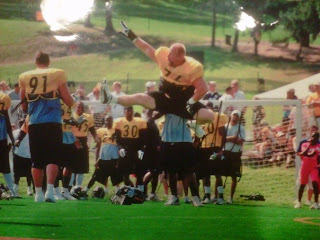 i also got this photo of ziggy hood signed.  the dude is real big. 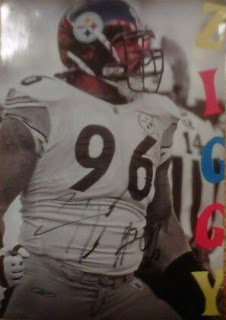 i also got to slap hands with james harrison, as well as a few other steelers.  so, despite the fact that i didn't get to watch them practice, i certainly did enjoy being up close to the players and wishing them all a great season.  nothing like training camp at latrobe.

now, the whole reason i had planned this trip to pittsburgh was that i was going to attend a continuing education event called "theology and baseball" held at PNC park.  as soon as i saw this event advertised, i jumped on it, since it combines two things that i love!  so tuesday morning i drove dawntawn (that's pittsburghese for downtown, for those who don't know) and entered pnc park through the media entrance.  we enjoyed a day of lectures and discussion on baseball and what it might have to teach us about ministry, and really gained alot from it.  we had lunch in the lexus club, and then got to walk around the stadium on this gorgeous day.  pittsburgh looks so beautiful in the blue sky and sunshine. 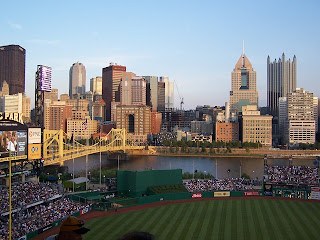 the game against the st. louis cardinals started at 7pm and i had a very good seat from which to view the action.  the buccos fell behind early, then took the lead on a three-run home run.  they eventually squandered this lead and the game was tied at 3 for a time.  until the top of the 9th when the cardinals took the lead 4-3.  it looked like a disappointing evening for the pirates, until local product neal walker led off the bottom of the 9th with a solo home run that tied it up again. 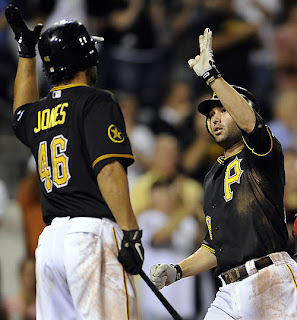 we were headed for extra innings (ironically, the same umpire was behind home plate as the game in atlanta that went 19 innings and ended on a terribly blown call in the braves favor).  the teams stayed in stalemate for almost two innings until garrett jones hit a ball not just over the wall but out of the entire stadium into the river for the walk-off win in the bottom of the 11th. 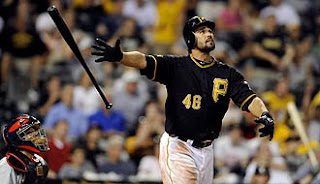 it was great to see great baseball in a great park with a great crowd.  very exciting.

so that was my week.  now it's back to work and preparing for the fall, which is nearly upon us already.  oh, and the steelers play tonight....

Crafty P said…
well now, isn't the new coaster called the Sky Rocket and wasn't that the old name for the big 'ol bungee thing that you used to work?

glad you had such a great trip to my favorite city. kennywood pics requested!!
5:51 PM

greg milinovich said…
the ride i worked on, which is still there, is called the sky coaster. but you are correct, the new ride is the sky rocket. rather unimaginative naming, imo. but an aweseome ride!

i'm so proud of you for staying up to watch the buccos game! you go girl! it was worth it, right?
6:28 AM