the dawn is coming!

well, it's coming up on that time again.  we're only a couple of weeks away from the start of the football season, and while that feels like it might as well be a hundred years, i figured it was probably the right time to go ahead and profess my love (in case you didn't know) of football in general and the pittsburgh steelers in particular.  the video above is a fun little take on the earthquake last week and it's relevance for the start of steeler season.  the folks over at benstonium.com make some really funny and quality videos.

anyone who lives in pittsburgh or reads the news (i try to read the post gazette online as often as i can) knows that the newest batman movie was just recently filmed in pittsburgh.  not only that, but it will have a huge steeler connection, as the executive producer of the film is a part-owner of the team, and as such enlisted many of the steelers to be in a scene featuring the gotham football franchise.   there was a great deal of buzz (as well as traffic) in the city about this film, and this video does a great job of making the connection between the dark knight and QB1.  this is well worth the view:

oh yeah, it is time.  i've watched that video 15 times already and every time i get more adrenaline pumping through me.  the dawn is coming!  holy seventh lombardi trophy, batman!  i.am.so.excited.

i've been reading.  i just finished reading through a fantastic steelers publication which comes out every year during the preseason, called the Maple Street Press Steelers Annual.  You can order it here. 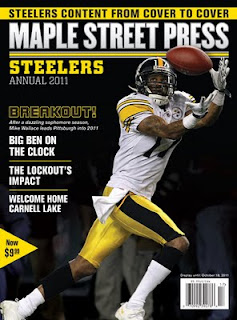 and now i am currently reading a book called "the ones who hit the hardest" which is a really cool read about the steel industry in pittsburgh, the rich bankers in dallas, the birth of the AFL and then the super bowl era, and the rivalry between the steelers and the cowboys.  it's a great read so far. 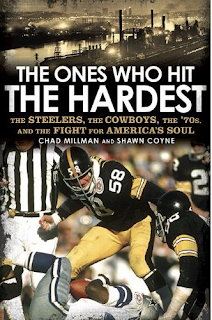 so between reading the steelers news each day, browsing the list of steeler blogs i love, reading publications and books, and watching youtube videos, i am AMPED.  that's right, all capitals.  like "somebody-get-that-guy-some-decaf" amped.  and, just to wrap this up and help you catch the fever that i am infected with, here''s a reminder of what is to come here in a couple of weeks: