keys to the kingdom

June 27, 2009
every once in a while i see a simple scene in a movie - a simple, mundane type of scene, but set to music - like a family at the dinner table or something, and i feel a sense of longing in me. that somehow i wish my life was that romantic. that i want to capture the moments of my life and set them to a soundtrack for the world to see. i want the life i live to be worth watching again. and then i tend to shelve that emotion among the dreams and unreachables in my soul.

but then i have days like this thursday, and i realize that i am living that life, if only i would just pay attention.
thursday was my day off. i woke up early and did some reading and praying, before the kids got up. they got up earlier than expected, because one of them peed the bed, so i took care of that mess, and then we watched cartoons in bed for awhile until breakfast. shannon uses my day off to get some much needed work done for her business, so i got jack and cade dressed and we headed over to the library, where we looked at books, played with puzzles and puppets, and ended up borrowing books, cd's and a dvd. then we headed down to the church, where i sat in a lawn chair listening to coldplay and drinking coffee while the boys rode around the parking lot on their bike/scooter/big wheel. our driveway at our house is pretty steep, and they can't really ride very well there, so we spent the rest of the morning on a variety of wheels at the church. while they rode i finished a book i've been reading ("my beautiful idol," by pete gall), and by then it was noon, so we went through the drive-thru at mcdonald's and took our chicken mcnuggets to the park for a picnic. after enjoying our chicken-ish product and golden fries, they played on the swings and slides and so on for another hour. i watched them run and laugh. i pushed them on the swings and touched their little backs as they arched back towards me, like metronomes counting out their perfectly joyful day.
after the park we headed home, where we played with bubbles. after we were all sufficiently covered in soap, cade took a nap and jack took his 'quiet time,' during which i worked on and finished this collage. 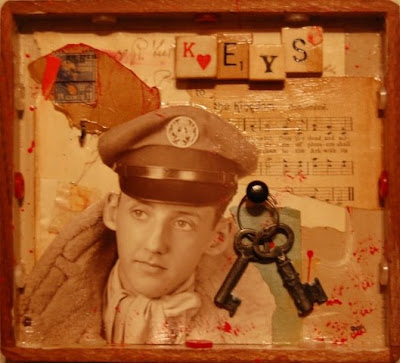 "keys to the kingdom"

jack was beat from all the playing so he fell asleep during his quiet time. i let him sleep a little, and then woke him up and showed him my collage. he liked it and wanted to make one with me, so we made this little fun one together: 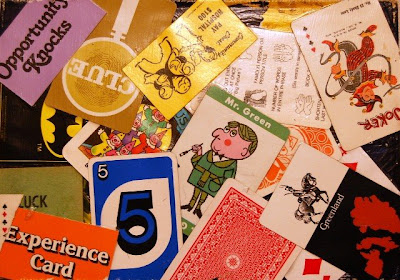 jackson a. and gregory a. milinovich

after caedmon woke up from his nap, we watched an episode of meerkat manor and then decided to exercise together by having a dance party. we danced like monkeys who had downed a few too many red bulls, laughing all the while. after i sweated off the weight of a third child, shannon called us up for a wonderful dinner, which she had been upstairs making: homemade crab cakes with a tropical sauce, rice and beans and fried plantains. yum! we ate and talked and, at one point, laughed until we snorted and cried. the kids had no idea what was so funny, but they laughed right along anyway.

after dinner we went to rita's for some italian ice. in the car on the way to and from rita's, we rolled down the windows and sang and felt the air in our faces. then home for bath. it was shannon's night to put the kids in bed, but as i sat on my bed watching the yankees game, jack poked his head around the door and said, "i love you so much, daddy."

you know, days don't get much more romantic than that. yeah, there were tears and a few sibling fights along the way. there are the inevitable wet beds and scraped knees, but there was also unbridled, unbuyable unfilmable joy. just a family laughing, loving, and living their way through another day. i didn't capture it on film, and i won't be able to set it to some song with a nice emotional string part, but i did live it. i danced. i laughed. i sang. and i loved as fully as i could. that is a day - a life - worth living. and i have a feeling it is what God envisions for all of us as God's children. and what we mean when we pray, "thy kingdom come, thy will be done on earth as it is in heaven." the keys to that kingdom are loving wildly and freely, and living abundantly right now in the midst of whatever day in which you find yourself.

monica said…
thanks for writing that. i needed reminding of it today
monica
4:31 PM