seven p's on a plate

May 27, 2009
everyday we give jack some worksheets to work on his letters and numbers. he earns a dime a day if he completes his worksheet. what you see below is his worksheet from a couple of days ago. we were working on the number 7. he was supposed to look at the pre-made sevens and then make his own, which he did remarkably well, in my opinion. then he was to count and color the glasses of water (?), which he also did with ease. 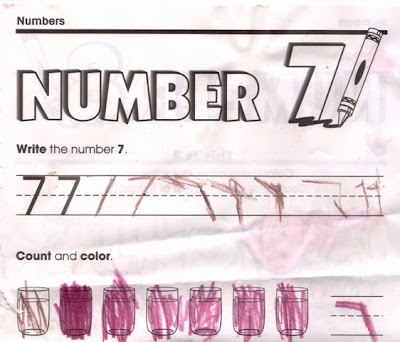 the final instruction, at the bottom of the page, was to color 7 peas on a plate. since he received these directions orally, he thought he was supposed to draw seven p's on a plate, which is entirely different. and so he did this:

cathyq said…
Can anyone say literal? He is soooo much like his father!
3:40 PM