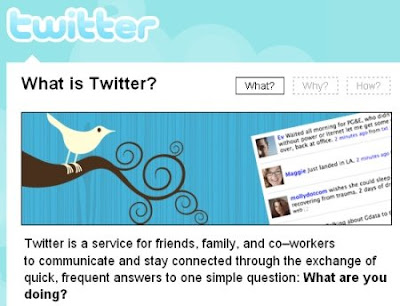 perhaps you've seen it at the end of the news broadcast: "follow us on twitter." or maybe you've seen it right here on the margin in this blog, or on someone else's. chances are that you've at least heard of twitter, as it has seemingly invaded not just social networking, but pop culture in general, having grown 700% in the last year, ballooning to over 10 million users in just 3 years. it is certainly a phenomenon, even if you don't know what it is!

what it is, actually, is a vehicle for what is called "social networking," which is a fancy way of saying making/keeping relationships without the traditional geographic borders. if you know what facebook is, then twitter can be easily described as a place dedicated solely to status updates, with the main restriction being that they must be 140 characters or less. a quick perusal of twitter and many peoples "tweets" (updates) shows a tendency towards the inane, superfluous, and even narcissistic. in fact, many of the problems that critics of twitter (and other social networking sites like facebook, my space, etc.) have is that it reinforces a kind of cultural individualism/narcissism. these critics ask, "what can you possibly say in 140 characters that is meaningful and rich for real human relationship?" This hints at another of the major criticisms aimed at twitter, that it doesn't really allow for deep or thoughtful reflection, and instead fosters a manic and shallow connection with people.

i've been on twitter now for about 8 months. i think that is enough of a body of work to evaluate it a bit. i started my twitter account out of utter curiosity, and have kept at it, with almost 800 updates in that time, which means i update it about 100 times a month. just so you get a sense of how twitter works, i am probably on the low end of the spectrum in terms of how often i update (100 times a month = around 3 updates a day).

i am making no effort to defend twitter here against some of the real and legitimate criticisms leveled against it. i think that shallowness and narcissism are both real concerns not just with twitter, but also with facebook and my space and other social networking sites. when we are infatuated with ourselves, that is a problem. when we are promoting ourselves as a commodity, that is also a problem. when we are too consumed with ourselves to see our neighbor? also a problem. the internet didn't create these problems. twitter doesn't corner the market on these problems. they are human problems, perhaps exacerbated by our access to immediate and easy ways to project our own voices.

in my experience i have found twitter to be more valuable than facebook. if i were to cancel one or the other, it would be an easy decision for me (in fact, i have seriously been considering it lately). facebook has been an interesting way to connect to people from my past, and to voyeouristically peer into their lives, but that experience has left me lacking alot of real contact. for example, i am facebook friends with about 50 or so old high school friends, most of whom i can barely remember and have yet to have a meaningful conversation/connection with on facebook. it is easy for me to learn "25 random things about them," or their "5 top dog breeds," if i really want to, but i am questioning the value of such information.

on the other hand, twitter has allowed me connect to people i don't know. i currently follow 174 people on twitter (which means that their statuses [stati?] show up in my feed), about 10 of which i actually know in traditional terms. instead of basing my twitter relationships on what high school i went to, i have based them on shared interests (theology, music, art, steelers, etc.). this has led to a kind of community i did not expect. i have had conversations, for example, with steelers fans from across this country who are not people that i might not normally come into contact with. i've had conversations about everything from the merits of eating metamucil for breakfast, to the relationship between my faith and my love of football. i have found some real human connection on twitter in ways that have been fascinating, if not truly valuable.

my main experience with twitter is that i have used it as an RSS feed. i get my news from the NYTimes there. i get all my steelers updates there. i get updates from the united methodist church there. i find out what is happening around the world there, and not just from major news outlets, but from actual people who are living through things. i use it as my starting point for engaging the world wide web.

as i close this reflection, i simply want to say that i am not arguing that twitter is good, or better than anything else. i am saying that in my experience, it has been far more valuable and interesting. and for me, the danger hasn't been the usual suspects (narcissism, shallowness), but another age-old problem. i need to make sure (as we all do) that our social networking doesn't happen at the expense of our own relationships at home. we all need to put down the computer, or the remote, or the wii controller, or the magazine or whatever it is that we are distracted by, and engage the people in the room: our own families and loved ones who are often calling out for our attention.

those are my thoughts. what are yours?

for more info on twitter as it relates to responsible living and faith, check these out:

joecharles said…
I love Twitter. It’s restored the personal aspects of interaction, lost to some degree, in the world of traditional digital communication. I feel like I’m communicating with other humans as opposed to a computer screen when I read or send messages. TweetDeck has made the experience even more enjoyable. Now if Twitter would only find a way to add spell checker, lol.
8:26 AM

stella g. said…
i'm not a twitterer. don't really plan to be. but appreciate you thoughts on it. a very different perspective that i've considered. the two truest things: the internet/twitter/social network sites aren't the problem. just another avenue for human nature to do its thing. and the time spent such virtual sites can come at the expense of real-live/real-time relationships. good points.
7:03 AM

cathyq said…
Good thoughts on this social networking tool. My biggest problem is finding the time to do it. I just can't keep up with it all.
5:37 PM