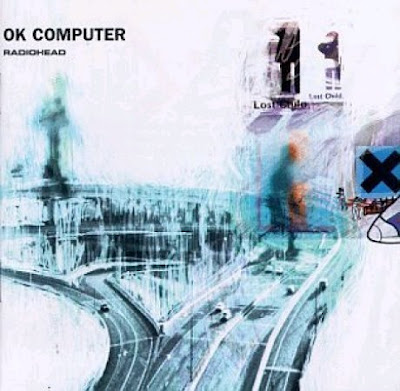 there is no question that at least one radiohead album belongs on my list of top 15 albums, but the problem is, which one? i absolutely had a very difficult time deciding between ok computer, kid a and amnesiac. i honestly could have pulled one out of a hat and just went with it, but i decided on ok computer as my number 13 album, simply on the basis that it was the first radiohead album that i listened to. and that moment is actually the moment that i fell in love. from the very first time the blips and beeps and disjointed rhythms found their way into my ear canals, i got it. i understood. i found i could relate to thom yorke's droning whine. i found i could relate to the sense of dissatisfaction. i don't know if it is a generational thing, or a cultural thing, or just a human thing, but i find that there's a part of me that is very much at home in the soundscape that radiohead creates, particularly on ok computer, kid a, and amnesiac. it's angry, but not in a screamo way. it is desperate, but not in an emo way. it's avant garde, but not in a free form way. if you haven't heard this album, you really should, not because i can guarantee that you will like it (my wife hates it!), but because it is that important. this late '90's radiohead has been imitated time and time again, its influence undeniable. and it has a feel to it that, at least for me, just makes sense in the midst of the world today. it is sort of uneasy with status quo, challenging technology, consumerism, and more. whether you agree with them or not, you can't deny that radiohead is an important artistic voice.
since all their videos are blocked for embedding on you tube, i am including this acoustic version of "no surprises." enjoy.