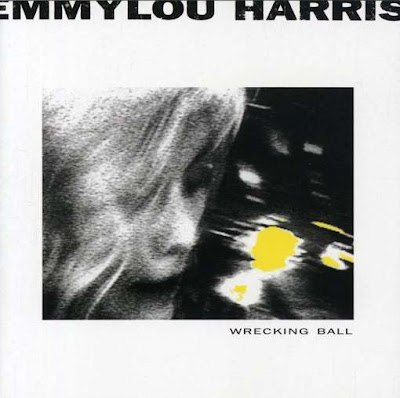 number 10 on the list of my top 15 albums is wrecking ball by emmylou harris. now, emmylou harris is a prolific artist and has put out a TON of albums, not to mention that she has sung with everyone from buddy and julie miller to bright eyes (i love her on bright eyes' i'm wide awake, it's morning). and i own several of her albums and collaborations, because i have become a big fan. but nothing that she has done - nothing - moves me like this album with its airy guitars and big drums. produced by daniel lanois (who also produced u2's achtung baby, along with brian eno), it has lanois' signature atmospheric and moody sound. this album was a huge departure for emmylou, for that very reason, but i had no idea about that when i picked up this album in 1999. i just picked it up because lanois' name was on the back. the fact that steve earle, larry mullen, neil young and lucinda williams also appeared on it was just gravy. but what really solidified this album in my top 15 list was just the strength of the songs. every song is a gem. it just feels like a foggy night, fraught with emotion and potential. it rings out like a church bell, with just as much sense of history and calling. it beats with a pulse, alive and well, but not frisky so much as faithful to a deeper spirit - an undercurrent of both brokenness and redemption. emmylou's distinct voice is perfect for lanois' production, and the result is, at least for me, absolutely mesmerizing. i love this album. i would take it to my desert island. and even if i were stranded there alone for all of eternity, i would never be able to forget the depth of human emotion, because i would hear it in this music.