15 albums: now that i've found you 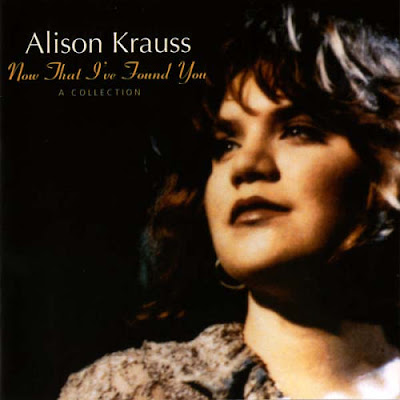 moving forward with my top 15 albums of all time we come to this one: now that i've found you: a collection by Alison Krauss. the album is a collection of songs from the early part of alison's career, released in 1995, when i was in college. that is significant because, i don't know exactly who introduced it to her, but my wife introduced it to me. actually, to be totally honest, she invited me over to her dorm room one day because her and some friends were going to be singing one of the tracks off this album "when God dips his pen of love in my heart." i loved what i heard and borrowed the cd (that's right, kids, we used to buy cds - you could actually hold the music and lyrics in your hands), and fell in love. mostly i fell in love with alison's voice. my friend paul and i would listen to "oh, atlanta" on full blast and just melt at the way her voice cut clearly into our being. we couldn't help but be affected by it.

however, this album, which i fell in love with, came to be more than just a record i enjoyed; it became an introduction to a whole style of music which became an important part of my musical life. having grown up with the common prejudice that 'all country music is depressing garbage,' i had always disregarded anything that even approached country. it was in college that prejudice began to be exposed for what it was, and i discovered the rich soil that is country music. and a huge part of that journey was my falling in love with bluegrass. which started with this album.

i can still put this album on and sing nearly every word (except when i just shut up and listen to her buttery velvet voice sink into my soul). enjoy.


ps. this album also wins the award for 'worst album art' on my list. i mean, they couldn't have found a better picture? really?

Anonymous said…
Funny, I used to think the same thing about country music until I was turned on to an Alison Krauss (and Union Station) album - Lonely Runs Both Ways (2004). So way later than you but, hey, better late than never! A Living Prayer breaks my heart every single time I hear it.
3:33 PM

Crafty P said…
ditto what he said. allison was my first dip into the country music pool and I, too, love her and emmylou harris (is she country? bluegrass? not sure, but i like her as well).

so I owe my love to Shannon for introducing me to Allison Kraus, huh. Thank her for me!

I also own the Oh Brother Where Art thou? Soundtrack b/c she sang on it!
2:12 PM