15 albums: august and everything after 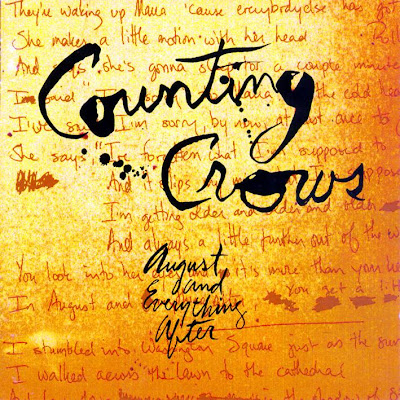 number 9 on my top 15 albums of all time list is the counting crows' "august and everything after." it came out in 1993 when i was a senior in high school, and sent the song "mr. jones" right to the top of the charts. i remember sitting in mr. vass' senior english class discussing the literary merits of the lyrics to "mr. jones." but it wasn't in high school that this album made its way into my heart. i wasn't quite ready for it yet.
-
but soon college came. and the independence and freedom (and, in part, lonliness) that college brought me offered the perfect canvas for "august and everything after" to paint its acoustic sketches. from the jangly "mr. jones," to the the desperate "round here," to the heartbreak of "raining in baltimore," this album felt like i had been born to sing along with it, in my whiniest adam duritz impression. this album provided the perfect soundtrack to my freshman year of college, and, to a lesser extent, to all the years that followed. i still love this album. no album that they have made since has even come close, in my opinion.
-
here's a track from that album called "sullivan street."