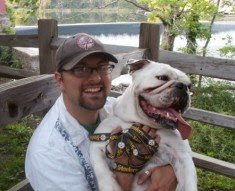 happy birthday to our beloved dog, max milinovich. if you've never met him, you should know that he's a english bulldog, a huge steeler fan, and an avid drooler. he suffers from narcolepsy. he weighs in at about 60 pounds, and can pack a pretty mean punch if you are standing between him and something that resembles food. other than that, though, he is a wimp to the greatest degree. he is scared of cats and squirrels. he just prefers to be left alone. and sleep.

today he turns 8, which is actually a pretty good lifetime for a bulldog, who are particularly prone to several different health issues (not that we haven't had our fair share of those with him). in the 7 years we've had him, he has definitely become an adored part of our family. as he is a frequent reader on the blog, please feel free to wish him a happy birthday in the comments section.

here's to a night of milkbones and scratches behind the ear!
2:37 PM