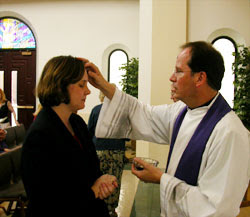 i had a great ecumenical moment yesterday. i just hope that the pope isn't mad at me about it. i might have just landed myself on the vatican's "10 most wanted" list. let me tell you what happened.

yesterday afternoon, after a noontime ash wednesday service, i headed over to new brunswick to visit a teenager in the hospital. as he was in tutoring when i got there, i ended up spending a good bit of time with his mother and aunt. i realized that they would all like to experience the imposition of ashes for the beginning of their own lenten journeys, so i headed down to the chapel to see if the hospital had ashes. before i left the room they told me that the tvs in the rooms have a channel that shows the chapel, so i told them to look for me and i would make faces at them. unfortunately, when i found the chapel, someone was in there praying fervently, so i tried to wave and make faces as discreetly as possible. but there were no ashes there.

so i got directions to the chaplain's office and knocked on the door. no one answered so i opened the door and went in. there was a receptionist's desk on my left and a man sitting in a chair on my right. he looked like he was waiting for someone so i asked him if anyone was in the office. he said he didn't know, and as he noticed the ashes on my forehead, he proceeded to tell me that he was hoping to receive ashes before he went home for the day. as soon as he said this, i noticed some containers of ashes on the receptionist's desk, and so i said, "oh perfect! this is what i was looking for. i assume i can take one of these to a patient's room."

"oh, you mean, you're a priest?" he inquired in response.

then there was this moment of indecision. i could tell he really wanted me to offer to impose the ashes for him, but i was weighing the possibility of being sought and destroyed by opus dei or something. while in this conundrum, i found myself speaking without really giving myself permission. "i mean, if you want, i could do this for y..."

"really? that would be great. thank you so much."

he seemed really happy about that. i didn't tell him that he might have just landed himself some extra time in purgatory or something. i'm really not familiar with the rules here. i simply took the ashes and put them on his forehead, like i did several other people yesterday. our differences didn't really matter in that moment. we were both just human beings. broken, fallible human beings, trying to recognize our own mortality; trying to start this journey toward life and light from the shadows; trying to allow the grit of ash to get us started off on the right foot. both of us. the white protestant united methodist pastor and the black roman catholic man. both marked by ash. both of us alive. both of us broken. both of us bound by hope in the One who invites all of us to the feast.

as a non-catholic, non-well anything. not sure what brand i am, but i never grew up observing lent. however, this year, several of my family members are taking it seriously and using it as a time of reflection and gratitude. it has brought us together and given us cause to really think about Christ's sacrifice...
12:10 PM

Emoly said…
that is incredible and a story of true Christianity, not Catholic or Methodist, but Christ in His true form. Amen
9:07 AM

Anonymous said…
Great story; thanks for sharing. Reminded me of attending my aunt's funeral Mass 10 years ago and struggling with whether or not to take Communion (yea, that extra purgatory thing....) and then suddenly realizing that Jesus, as I understand Him (for what that's worth), wouldn't deny me the opportunity to partake in His body and His blood simply because I hadn't confessed my sins in a way that a bunch of old white guys in Rome determined was the one and only way to do so....Boy did I feel a sense of freedom that day! So last month, when I was attending my uncle's funeral Mass, I didn't hesitate!
10:22 AM

Cindy M. said…
I believe you were just being a man of faith and God smiled on you. We are all His, one tree stump with many branches of how we choose to worship Him. I went through the same feelings as greg C. with my father in law's funeral service and taking communion. But, I know... God knows my heart best.

Unfortunately, the church Jamie and I attended did not do the ashes, i was disappointed as I have come to rely on that service to set me in the right tone for Lent. But, again... God knows my heart.
4:59 PM

stella g. said…
i really like this story. it's very human. very raw. frankly, what God intends for us to be with Him, with others. thank you for sharing it.
11:24 PM