February 10, 2009
let's get one thing straight. in general i hate those email lists where you are supposed to write 25 things about yourself and then send it to ten people who then do the same thing. actually, hate is too soft a word. if you get a big pot, start with 4 quarts of water, add a whole box of loathing, stir in a bunch of hate and despising, that's closer to what i meant to say. so, if you are on facebook, or you have an email account, and you get those "write 150 random things about yourself and send it to 300 other people or else your soul will deal with eternal suffering" kind of things, DO NOT SEND IT TO ME. because if you do, it will be lost in some digital wasteland somewhere.

that being said, i was recently sent one that asked me to name my top 15 albums of all time: the ones that moved me and woke me up and caused me to remember a feeling i never even remembered feeling before. now, as i said above, i normally ignore these things, but since it had to do with music, i read it. and, believe it or not, i was actually moved to give it a try, probably because it asked for 15 instead of the standard 10. i find that limiting anything to my top ten is just too difficult. but 15 felt a bit more workable. so i gave it a try. and one by one, i want to share those albums with you, for your perusal, discussion and whatever other reaction you might have. i am presenting them in no particular order, as that would be nearly impossible for me. so let us start here: 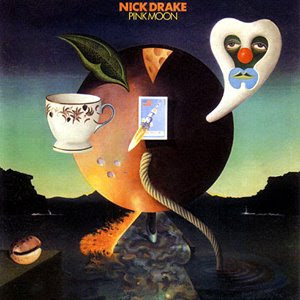 pink moon, by nick drake. it was released this month, 37 years ago. i discovered it when this guy named nate shared it with me in college. i remember listening to it and thinking that i had just discovered a miracle drug. i didn't know if it could cure cancer, but i knew that it could cure what was ailing my soul at any given time during (and ever since) my college years. drake was a rather reclusive young british man in the late '60s and early '70s. he recorded three albums in his lifetime before his untimely death. in recent years his fairly obscure music has become a bit more mainstream as it has been used in movies, shows and even volkswagen commercials.

i love pink moon because it is so sparse and somewhat haunting. it feels like drake knows how to speak a language of lonliness and longing, a language that we have all felt deep in our gut. only a very few have been able to find a way to put this language into words or music or color, but i think drake accomplishes this on this short album. some may find it depressing, i suppose, but i find it familiar. i find it to be incurably human in a raw and uncalculated way. and, amidst so much contrived and over-produced art in the music industry, this naked authenticity is still incredibly fresh after 37 years.

here's a video with some stills of nick drake and some art set to the title track from the album. use the comments to tell me what you think of nick drake. discuss.

Crafty P said…
well, you introduced me to nick drake and pink moon. I love that song and remember seeing that VW commercial and maybe calling or emailing you b/c it was burning a hole in my cerebrum- the thought of "was that who I thought it was or was my mind playing tricks on me"
that was before I knew you could google things like "who sings that song on the VW commercial".

I don't know much of his music, but enjoy that song particularly.

ps. I admit I THOROUGHLY enjoyed the FB 25 random things tags. I learned a lot of quirky and insightful things about friends and family.

pps. I loathe, with the power of a thousand burning suns, those fwds about sending something to 10 people or you'll lose a limb or something like that. hate isn't strong enough a word for those.
2:08 PM

Mary said…
i agree Christina...about the forwarding things. i have even gotten ones from "christians" that say that if you don't send it on...God will smite you or something pathetic like that. those rub me the wrong way soo badly.

greg...my music guru...why have you never introduced me to Nick Drake? i rely on you to keep me posted on goodness. though i guess you could now say "consider yourself introduced" when im not at school, i will listen to that song and see what i think :)
10:20 AM