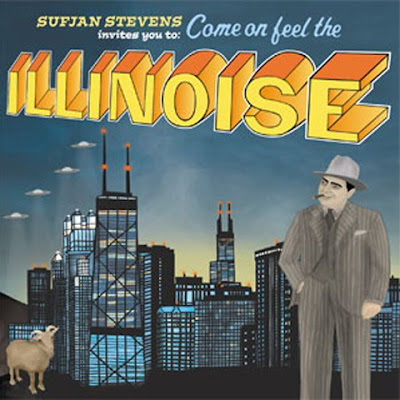 sufjan stevens' (pronounced soof-yawn) album come on feel the illinoise! is next on my list. this album changed some things for me in terms of how i listen to and enjoy music, and not really in a way that i can describe. this music is pretty much anti-cool when it comes to instrumentation and production. to be very clear: this is the opposite of whatever your local "hot 99" fm radio station is playing. rather than phat beats, here you've got full orchestra. rather than sweet samples and sultry sexual innuendo, you've got sweeping string sections. his official site over at asthmatic kitty records says that he has "a preoccupation with epic concepts," and i would argue that this carries over into his music as well. the music feels huge. enormous. busy. if folk music is the sound of a troubadour, then sufjan's music is sound of the city, which is appropriate, since he currently resides in brooklyn. its complicated and complex, but not chaos. and its completely refreshing. his 5 disc-set christmas album is incredible, too, as is his other state-themed recording, michigan.
here is his song "chicago" from the album. enjoy.