15 albums: dreams of the colorblind 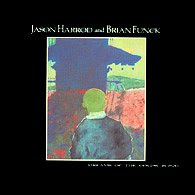 getting back to my list of my 15 favorite albums, here is perhaps the most obscure of all. but just because it is obscure doesn't mean it isn't awesome. trust me. it's awesome.

i first heard this album on casette tape when a guy named rob hanak with some connection to wheaton college gave me a dubbed copy in high school. i fell in love right from the first notes of 'blue sky morning.' i wore that tape out. so i researched and researched until i found a company out of illinois that was selling the cd. i bought it. i believe i have purchased at least 10 copies of this album since then, as gifts. when i was in college, i became an evangelist for the folky duo, telling everyone i knew about them, and lending cd's like a library. but it paid off, because soon grove city college became a sort of haven of harrod and funck fans, so the concert committee, which i was a part of, decided to try and bring them to campus. and they came! i invited everyone i knew, and they loved them. so we asked them again. and again. i know i saw them in the grove city area at least 5 times. but i digress.

all of this harrod and funck following started with a singular album, one collection of songs: dreams of the colorblind, an amazing collection of acoustic, jazz-influenced, harmony-laden tracks. now, let's get one thing straight: this is not the album you want to put on the ipod before your big wrestling match or something. this is not that music. however, if you want to sit with cup of coffee and reflect on your life; or if you want a soundtrack for a walk with an old friend; or if you want to feel your spirit rise a bit from the earth and ash of this world, then this is the album for you.

this may mean nothing to most of you, but it also may mean something significant to a few of you: the late great mark heard produced this little independent album. and it has his fingerprints all over it.

i can't find any harrod and funck stuff on you tube, but i found these tracks here that you can preview at least for a sample. my favorite tracks: nethy bridge, moment before the last, hand draws flowers, guessing game, worn out welcome...aww, forget it. all of them. it is the soundtrack of my four years at college.

thank you, jason harrod and brian funck, for making this music. it has helped form me into the person i am. Anonymous said…
incredible. this is one of VERY few albums out there that I can listen to from start to finish, no skips, no interruptions. Seriously one of the most well put together records ever. I've got to get myself a copy--I wore my tape out years ago at Asbury.
9:09 AM

greg milinovich said…
amazon has a couple used ones for $7 or something like that. scoop one up!
9:16 AM

Anonymous said…
is the Lion Song on that one? oh man. we'd listen over and over and over in our ol' GCC dorm room.
great pick!
9:54 AM

Anonymous said…
Sounds interesting, i'm gonna have to check this out sometime.

Crafty P said…
and I have YOU to thank for this gem of a cd, too. I fondly remember all my harrod and funck experiences and have most of their song lists from concerts past in notebooks here and there!

nethy bridge is an all time favorite, and so is any song that brian funck utters the word, clean.

pure bliss when I listen to these two. still love to hear jason's voice!

and to think our music-friendship all started in the gee talking about dctalk! ha!
3:01 PM

greg milinovich said…
today is my birthday, and facebook gave me a wonderful present....

Jason Harrod wrote on your Wall:

"Happy Birthday and thanks for the good words about DOTCB"
7:45 AM

stella g. said…
their other cd, with the leaning ship shadow, has played more times than i should admit. if cd's could be worn out, than mine is super thin. i was so disappointed they disbanded.
11:20 PM