January 19, 2009
well it is monday at 2pm (thank goodness today is a holiday), and i have finally calmed down enough to gather a few thoughts for this space. the main thing that i'd really like to say is THE STEELERS ARE GOING TO THE SUPERBOWL!!!!!!!!! sorry about the all caps. that's unusual for me, but i just can't help it right now. i am so excited. some thoughts about the game: 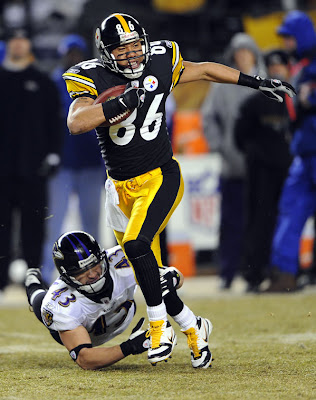 -hines got hurt. he says its just a sprain and that he will be fine in two weeks. but for this hines ward fan it was hard to see. still though, he was able to reach 1,000 recieving yards in the playoffs and pick up a couple of key first downs. and he was able to channel his inner blocking beast to limas sweed who lit up corey ivy. get better, hines. we're going to need you.
-phil simms is a steeler hater. at one point when the ravens were losing 13-7 he said the following, and i quote: the ravens have the steelers right where they want them. really, simms? really? the ravens want to be losing 13-7? i had very little respect for mr. simms to begin with, but i must lost what i had. its not professional to let your disdain for a team show in your call of the game. terrible job by him.
-ben roethlisberger was awesome. he threw some beautiful deep balls, avoided some sacks, threw some balls away, made plays out of nothing (like a beautiful touchdown to santonio), kept his head when things were going wrong (like sweed's ridiculous drop), and, most importantly, didn't turn the ball over. ben should be mvp of the game, really, if it weren't for one other player... 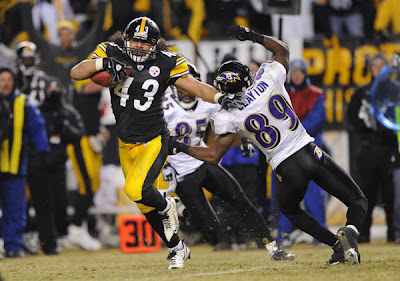 -troy polamalu was insane. i had been so worried about him going into the game because of his calf injury and the fact that he had looked so slow against san diego last week. but he was off the charts. his leap over the line on the flacco sweep was the stuff of legend, if not of leverage. his open field tackle on flacco's scramble was art, and his interception/touchdown was the nail in the coffin. after a week of listening to the media endlessly vomit their praise of ravens safety ed reed, saying he's the best safety in the league, possibly of all time, it was so nice to see troy, who barely ever talks at all, show up and demonstrate who was the best safety on the field last night. and speaking of hearing people vomit... 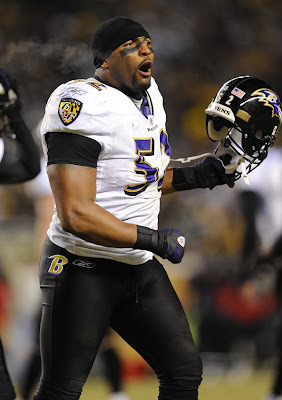 --ahhh ray lewis, you son of a gun, you. all week i had to listen to you talk and watch your girations and try to ignore that murderous guilt in your eye. all week i had to listen to media guys in neckties stumble all over themselves trying to call you 'sugar' and talk about what an emotional leader you are and how you couldn't possibly let your team lose to the steelers for the third time. i had to listen to you say how you shouldn't have lost to the steelers the previous two times and that your team was the only reason you lost. but nevermore. i need you to stop talking for awhile. i don't want to hear you complaining or cheering. i don't want to see you at the probowl smiling. or crying. or praying. or networking for your future job with the nfl network. i don't want to see you at all. i want you to go away and nurse your wounds. i want you to sit in front of your tv and watch highlights of lamar woodley sacking joe flacco. i want you to hear the word "steelers" about 52,000 times over the next two weeks. oh, and one more thing: i want you to learn something from the game you just got beat in. one of your teammates got laid out on a very brutal hit. and you know what, the steelers didn't celebrate it. they didn't dance and shake their bodies in a possessed passion. you won't hear them saying that it was their favorite moment of the season, like what you said about hurting some players this year. i want you to learn something from the steelers: its called class.
now i'm done with that. i don't know what the superbowl will be like, and of course it will suck if the steelers lose, but i'm not sure what could be sweeter than beating the ravens three times in one season! wow. it feels amazing, and i just want to enjoy this. GO STEELERS!

Kerri Smith said…
we were saying the same thing about Simms! Right, losing is exactly where you want to be. uh-huh.
i'll wave my towel a few times for you out here in central PA. :)
9:29 AM

Anonymous said…
Hey Greg! Man that game was amazing... I was literally jumping out of my couch when troy picked flacco off...You can ask my mom how much i was waving my towel..i gave her a chill haha. I was so happy that we won! cant wait for whats comming up in 2 weeks man!
4:01 PM