an open letter to coach tomlin 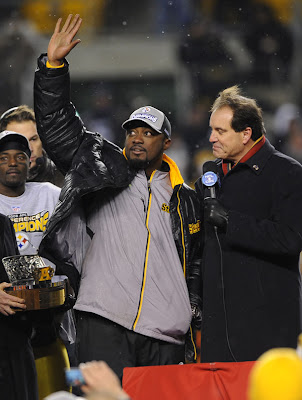 it seems you've been surprising me all along. in fact, the first time i ever heard your name it was a surprise. the every-twenty-minute-update on the sports talk radio show that i listen to in the car blared through my automobile speakers: the steelers have interviewed mike tomlin for their head coaching vacancy... mike who? i was surprised. this job has got to go to whis or grimm, right? i remembered the rooney rule and thought that this was just a token. but then, much to my surprise (again), those very same car speakers delivered another message to me: the pittsburgh steelers will name mike tomlin as their new head coach. i think i nearly veered off the parkway in complete shock.

but you know, i tend to be a glass-half-full fan and i trust the rooney's decision making, so i went into this thing giving you the benefit of the doubt. still, i didn't have high expectations. there was a long list of reasons why i knew that this coaching change meant that it would be several years before we would be dominant again in the afc: first year head coach, new offensive coordinator/system, and resistance from some key players, to name a few. and you know what? you surprised me. again. not only did you succeed, but the team had the number one defense in the league and won the division.

of course, the steelers lost that first playoff game and i was disappointed. but disappointment was certainly not the key word of the 2007 season for me. a better word, to be frank with you, would be impressed. i was impressed. with a number of things, actually, but most of all with you, coach tomlin. time and time again when i would read the transcript of your post game press conferences or hear your soundbytes on espn, i would be thoroughly impressed by you. by your demeanor. by your lack of making excuses. by your mastery not only of football-ese, but just of english in general. by your ability to pull the team together. by your instincts. by your game planning. by the way you managed to step into a new coach's nightmare (replacing bill cowher, who replaced chuck noll) and completely earn respect and admiration. you surprised me, coach tomlin. you surprised me.

2008 was the beginning of your second year, and i was ready for you now. i wasn't going to be surprised by you. when casey hampton showed up to camp out of shape, i wasn't surprised that you made an example of him to serve notice to all the players. when players began falling to injury, i wasn't surprised by your stubborn refrain that injuries are no excuse and that someone else will step up. when willie parker complained that the offensive game plans didn't include enough runs, i wasn't surprised at the way you handled it with precision and grace, calling willie out while still showing confidence in him. i wasn't surprised. but when we found a way to win the division again, win against the chargers in the divisional round of the playoffs, and then beat the baltimore raisins for the third time in one season to win a ticket to the superbowl, in spite of all the injuries and adversity? dang it, coach. i was surprised.

and then you stood there, holding that stupid tease of a trophy, but holding it with pride nonetheless because you won it at home against that team of all teams, and you pointed to the throngs of black and gold clad steeler nation - you pointed to me and my family - and you said with your trademark authority and confidence, "i absolutely love you guys." and, i hate to admit it, coach, but i was surprised. i hadn't expected that. here i was, preparing to write you a letter to tell you that i love you, and you beat me to it.

ps. i absolutely love you, too.

Crafty P said…
wow. have you ever written shannon a love letter like this?

i'm pretty sure I know the answer to that, but I just had to say it.

cathyq said…
You should definitely mail that letter (e-mail) I mean! Wow. I hope you love us all so much!
6:02 PM