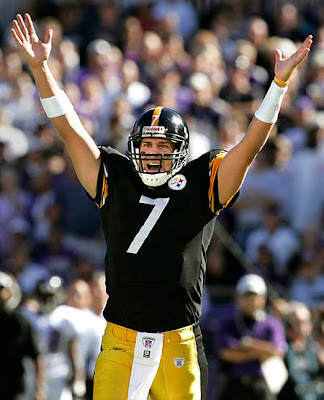 i know, i know...some of you are saying, "another steelers post? geesh." but you're going to have to deal with it for at least one more day, and, if all goes well, another 15 days.

actually, i've been wavering quite a bit this week about whether or not the steelers would be able to pull off the victory. i am a nervous steelers fan - i always have been - and i tend to err on the side of low expectations so that i won't be too disappointed (because i seriously get WAY too into this). and so one day this week i would be feeling a steeler victory and then the next minute i'd read something about the ravens defense or flacco's cool-under-pressure persona, and i'd begin to doubt again. its been that kind of week.

but here we are on sunday and i've finally landed on the side of the steelers. i believe the steelers win 24-16. here's why:
-the game is at heinz field
-the steelers are more experienced at this
-the steelers don't want to lose another home afc championship game
-the ravens are too beat up
-flacco will make a rookie mistake
-the ravens will lose their cool and get some stupid penalties
-the terrible towel is still mad about what the titans did
(and this last one is a big one and enough reason by itself to predict a steeler victory)
-at some point during the game the people who run the jumbotron will play this video (which they play at every game) and the crowd will almost crap their pants in excitement and the frenzy will spread to the defense who will then do something mere mortals only dream of. and the steelers will win.


how's that for reasoned football analysis? yeah, sorry about that. i'm a steelers homer. and while i'm not always the most confident guy, i have a good feeling about today...