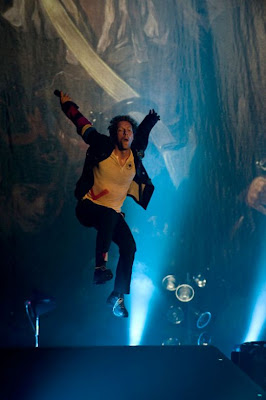 shannon and i had the awesome opportunity to see coldplay in concert in east rutherford, new jersey the night before last, and for any of my readers who like coldplay who will not get to see them on this tour, i thought i'd write it up for you. basically, it was fantastic.

they started off with life in technicolor, an instrumental piece, and the first track on their new album. they had these huge black semi-transparent drapes hanging in front of them during this song, and the band stayed mostly together in a small tight group around the drums. that in itself was one of my favorite parts of the show: they really seemed like a group of guys who likes each other. i mean, i could be totally wrong about that, but they appeared to genuinely enjoy one another. i remember seeing u2 several years ago in philly and, while loving the concert, having the distinct feeling that it was a band of individuals who somehow made things work. this was a very different experience. this had the feel of four guys who like each other making music that they love making together.

they went right into violet hill during which the drapes went up and the band was in full view. which meant that everyone could see chris martin and all of his craziness. i guess i've never seen a monkey hopped-up on caffeine, but i would imagine that if i were to see one, it would look very much like chris martin at a coldplay concert. he is hilarious. his whole body is somehow mirroring the music. he looks a bit like a marionette, convulsing with every turn and twist of the melody, like he is feeling the music in some deep uncontrollable part of his brain. he was very fun to watch. for those who have seen me dance at weddings and such, i think you might liken the two.

i forgot to mention that chris's wife, gwyneth paltrow was there in the audience, as well. which gave the whole thing a kind of weird hollywood feel. we're not too used to that here in new jersey.

then they did clocks and in my place, then speed of sound and cemeteries of london. as i have written before, there is a clear spiritual element to coldplay's lyrics, and with the added bonus of being there live with thousands of people, and seeing chris's passion, it was a very moving experience. when he sings "i saw God come in my garden/but i don't know what he said/for my heart wasn't open/wasn't open," i wonder about his spirit - his wildly moving and spirited soul. what has God been saying to him? has he been listening? have i? whoa, hold on a second... here i am at a freaking rock and roll concert and i'm having church. see what i mean? this isn't a concert about sex, drugs and rock and roll. it is a concert with very beautiful and moving art, which, if you let it, will lead you to deal with Beauty, whose other name is God. 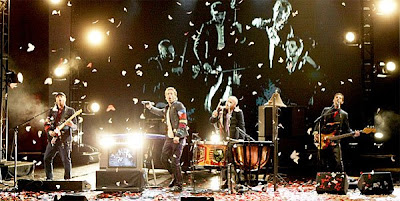 then they went into chinese sleep chant (which is the second part of 'yes' on the new album), then 42 and then fix you, which is not only my favorite coldplay song but is quite possibly my favorite song of all time. shannon asked me why on the way home, and i found that i can't quite put it into words. all i can say is that the first time i heard that song it immediately made its home in my soul. i just feel more alive when i hear it. that probably makes no sense, but it just is. it was worth the price of admission for me to see them do this song. they ended this part of the set with strawberry swing from the new album.

the next section began with them all out on the end of one of the arms of the stage, which extended out into the crowd, and they did a techno version of god put a smile upon your face which then morphed into talk, which ended with chris dramatically falling off of his piano bench. then he stayed out there at the end of the stage and did the hardest part with just him and the piano (he forgot the words at one point in this song and then joked with the crowd about where to get back into the song). then he did an absolutely beautiful piano instrumental called postcards from far away.

then they went back to the main stage for a very energized viva la vida and lost!, before they left the stage and ran to the back of the arena. standing together, just the four of them, amongst the crowd in the back of the place, they sang an acoustic version of the scientist, with all of them playing guitar. then they did the gospel-like death will never conquer with will (the drummer) singing and chris playing the harmonica. it was a really cool way to include folks who were really far away from the stage. then the lights went to black and a remix of viva la vida played over the speakers. then silence.

then chris made a noise like a phone ringing and the lights went up and they went into a really powerful version of politik, which led into lovers in japan which was backed by a really cool video montage. they then closed out with death and all his friends, which is shannon's favorite track from the new album, so we were glad they did that. then they bowed and did all that stuff, and, after letting the crowd beg awhile, they came back to do a one-song encore with yellow, which is one of my favorite coldplay songs, and the first coldplay song i ever heard. that ended the show. we loved it and had an absolutely fantastic time. it was a 22-song effort, visually stimulating, and easy on the ears. i felt like i had done a little worshipping, not of chris martin and his mates (although there was some of that going on in the arena, i can assure you), but of the God of music and questions and melody and passion. i worshipped the God of Life at the coldplay concert, and i thank those boys for helping me do that.


its not a great video, but to get a taste of the energy and joy of what we witnessed, you can watch this video here.