February 10, 2008
i asked jack if he wanted to draw with me yesterday. he said he did. so i got out some art paper and a big bin of markers. i thought we would work on a masterpiece together. i asked him what we should draw, and of course it was "a tiger! roaaaarrrrr!" and so i began to draw a tiger, but when i asked him to help me, he just wanted me to draw it. so i began to ask him where to put things and what color things should be, etc. but i ended up doing all the drawing, which is a scary thing, since i'm not much into drawing things. here is my tiger: 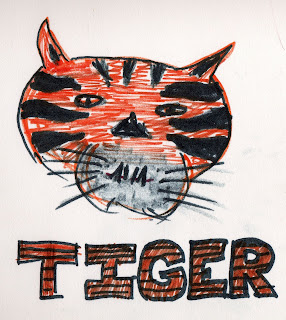 then, when we (i) had finished the tiger, he wanted me to draw a 'big green dragon, roaaaarrrr!' i don't know what it is with him and roaring, but it seems to me that one of his favorite parts of life is roaring. so, again i tried to enlist his help in the dragon drawing, but he assumed a mostly supervisory role. he was pretty critical, though, so his input is very vital to the dragon you see here: 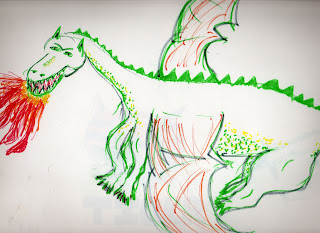 after he went down for his nap, i was inspired to draw some more. i don't often have a bucket of markers out and a nice big piece of art paper, so i started drawing whatever came to mind. when i do this i often end up drawing something that looks like it could be a collage. it doesn't always end up looking like it could be the state of pennsylvania (that was totally unintentional), but it usually does end up being just a mash-up of images and words and patterns. as i was drawing i was reflecting on today's Gospel reading where Jesus keeps answering satan with scripture when he is being tempted in the wilderness. for whatever reason, as i reflected, here is what i came up with: 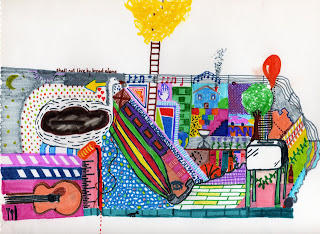 it is written, "man shall not live by bread alone."
peace,
greg.

Anonymous said…
The last picture you did is amazing greg! its now my comp backround hahaah good job!
3:07 AM