akeelah and the bee 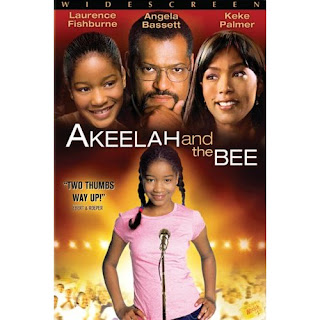 last night for our reel life: discussions on film and faith at church we watched akeelah and the bee, a 2006 movie about a girl who overcomes great odds to get all the way to the scripps national spelling bee. it is a great story, a real feel-good, underdog-makes-it, tears-well-up-in-your-eyes kind of story. but it isn't the greatest film in the world. the dialogue seems unrealistic to me, the characters are too often caricatures and stereotypes, the plot a little too formulaic, and the acting amateurish (especially laurence fishburne, who i thought was pretty awful in his performance of a emotionally unstable college professor).

we ended up having a really interesting dialogue about racial and ethnic stereotypes, about how majorities set norms and mores, and about the assumptions and presuppositions that all too often inform our relationships with all people. when we ought to see people as individuals and see the image of God in them, we sometimes see people more as types, or as we expect them to be based on race or socioeconomic status or, in my circles, denomination, and many more. and so we had a fascinating and, i hope, helpful conversation about these issues and how films and television often serve to reinforce those assumptions rather than challenge them. this film, in my opinion, uses racial and ethnic stereotypes as a storytelling device and by doing so really makes some sweeping assumptions about various races and reinforces a kind of subtle (or not so subtle, depending on your vantage point) racism.

but another thing that struck me about this film is that it really appealled to me. i mean, despite the fairly poor writing, the unbelievability of parts of the plot, and the rather formulaic storyline, i found myself drawn into it and really responding emotionally to it. i really wondered about this, because i can't legitimately say that this was a wonderful film. i don't really think it is. but i can say that i really liked it. why?

i don't know. maybe you have some thoughts on why we can be drawn to average art. my thought in this particular case is that we were made to communicate with stories, and even when the story is formulaic, we like hearing (seeing) stories that inspire and move us. it isn't always about technical brilliance or incredible writing or beautiful cinematography. sometimes it just comes down to the story: it is just about the characters and how we see ourselves in them and what that conjures up in us.

and so, i wouldn't recommend this movie as the pinnacle of film-making or anything. and if you are in the mood to watch with a critical eye, watch something else. and by all means, be aware of how the film serves to reinforce some pretty awful stereotypes. but on the other hand, if you want to be inspired that the image of God is within you, and that you are capable of doing things you have trouble believing, i would recommend this story.

has anyone else out there seen it? do you have thoughts on it? or thoughts on why we are sometimes so attracted to mediocre art?