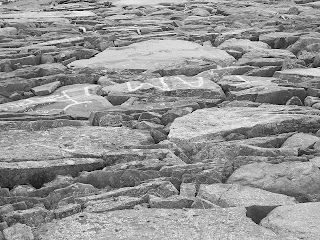 as i've been reading the texts for the next two sundays (palm sunday and easter) i have been struck by the stones that i have found there. this sunday, Jesus enters jerusalem on a colt, with the people waving branches and shouting. it is a revolution, of sorts, or at least a protest. but there are pharisees in the crowd, and they aren't pleased. they tell Jesus to make the people stop saying things like, "Blessed is the king who comes in the name of the Lord." but Jesus replies, "if these people kept quiet, the stones would do it for them, shouting praise." or, you may be more familiar with the translation, "these stones will cry out."

a few verses later, jesus is weeping over jerusalem, apparantly troubled by what he understands to be the fate of the city, and he says some pretty harsh things, and one of them is that "your enemies will not leave a single stone in place (luke 19:44)."

so what is the rightful place of stones? we will hear about another stone next sunday in john 20 (it also occurs in luke 24). something about a stone being rolled away. there seems to be an awful lot of talk about stones here in these stories. what's the deal?

i have many thoughts at this point in the week, as i approach my sermon on sunday. sometimes the hardest work of writing a sermon is eliminating all the things you won't say. but one of the questions that is bouncing around my spirit right now is: are the rocks crying out? have we/i become so silent that the rocks are crying out? have i lost my voice, somehow? have i become content to let the rocks speak for me? have we as Christ-followers become a silent sub-culture for the most part?

and what about the rocks that build, piling them on top of each other? the cathedrals and towers and churches and muli-purpose rooms we build, funneling our finances into bricks and mortar, buying into the modern myth of "if we build it, they will come." what about those rocks? what will remain when no rock is left intact? what voice will we have then?

cathyQ said…
Wow, I never thought about all the stones in those stories! In a way it reminds me of Flavius' speech from Shakespear's The Tragedy of Julius Caesar when he calls the plebians "You rocks, you stones, you worse than useless things" because they won't protest or cry over the death of Pompey who has just been killed by Caesar. I don't want the rocks to cry for me either, nor do I want to be silent as a stone. My hope may be built on solid rock, but my witness and voice should echo throughout the rocks of indifference or the stones of man-made edifices. Shout to the Lord!
5:39 PM

Anonymous said…
last nite frank & i were laying in bed watching the hallmark channel (sadly, this is marriage after 17 years) and we saw the new UMC commercials - have you seen them yet? they are very awesome. try to watch the hallmark channel because they run them on there all the time. did you write these commercials? they are really reflecting your preaching over the last 6 weeks.
11:11 AM

greg milinovich said…
i haven't seen those commercials yet, but i would like to. and, no, i didn't write them. are they still the open hearts/minds/doors theme?

we are still trying to figure out as a global church what it means to be people who say they are open. are we really open? i have my doubts...

glad this got you fired up. way to bring it back to shakespeare. i appreaciate the literary flavor you bring to the comments section.

please leave no stone unturned in finding references from the bard that our relevant to our discussions.

anyway, i am really looking forward to the next two sermons as i try to really use the image of a stone to help re-think the palm sunday/passion/easter story. should be fun...

Anonymous said…
yes, they still say the open stuff. look, i've been exposed to alot of different church settings, many different expressions of faith and many closed minds. that's why if i have to go to church at all (and i guess i do it's a good thing to have fellowship with believers) i still want to be in a place that at least puts it out in the universe that they have open minds and hearts and doors. if the execution isn't perfect then let's keep working to make it that way. i love that i can be an arm waving lunatic right next to a guy (frank) who doesn't move at all during worship. can't find that everywhere.
11:40 AM